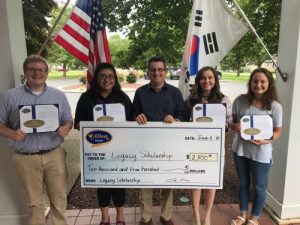 SEAFORD, Del. – June 11, 2018 – Allen Harim, a leading producer and processor of No Antibiotic Chicken on Delmarva, presented five students with the Allen Harim Legacy Scholarship, which provides a $2,500 financial award for college.

The Allen Harim Legacy Scholarship was created last year when the company announced they would be using savings from a newly installed solar project to create the program. Children of employees and contract growers wanting to attend college or trade schools were eligible to apply for the funds.

“We are pleased with this year’s award recipients, and look forward to creating a legacy that will pay dividends for the families of our employees and growers for generations to come,” said President and CEO Joe Moran.

The scholarships are being administered through the Community Foundation of the Eastern Shore.
Students and their families attended a lunch reception at Allen Harim’s corporate headquarters last week.

This year’s winners include (in alphabetical order):

• Alyssa Givens, of Laurel, Del. Her parents, Glen and Jennifer Givens, is a contract poultry grower for Allen Harim with his Five Points Farm. Alyssa will be attending the Sidney Kimmel Medical College of Thomas Jefferson University in Philadelphia in the fall. She graduated from Laurel High School where she served as Valedictorian. She hopes to become a doctor and return to her hometown to help reduce the physician shortage in Sussex County.
• Jacob Haynes, of Calhoun, Georgia. Jacob’s father, Patrick Haynes, has been our Breeder Manager in Liberty, North Carolina since 2014. Jacob is planning to attend Western Carolina University in the Honors Program, and pursue a degree in mechanical engineering. He hopes to one day work for a major automobile manufacturer. He also hopes to earn a Masters of Business Administration at some point in his career. In high school, he played football all four years, as well as being an active member of the BETA Club, the Key Club and the National Honor Society.
• Fantasy Hopkins, of Bridgeville, DE. Her mother Michelle Horne has worked at Allen Harim in the Sourcing department at Corporate Headquarters since 2008. Hopkins graduated from Sussex Technical High School last year and will be attending her second year at the University of Delaware. She is majoring in Exercise Science, with the hopes of one day going on to become a doctor. In high school, she enrolled in the Physical Therapy-Athletic Health Care Tech area, and earned a certification to be a Physical Therapy Aide, and also earned a Cosmetology license as part of the school’s Academic Challenge program.
• Diana Ramirez-Irineo, of Georgetown, Del. Her mother Maria Quintanar has worked for Allen Harim since 2011 on the production line. She is currently a Line Leader on the Leg Cut Up line. Diana plans to attend the University of Delaware in the fall, having graduated with an Associate’s Degree from Del Tech in May. She hopes to pursue a career as an Outreach Coordinator working closely with the Latino community. Her experience growing up as a first generation Latina student has inspired her to want to help other students succeed.
• Joshua Tucker, of Boonville, North Carolina. His father Charles Tucker has worked in the Breeder Department in Liberty, N.C., since 2010. He is a senior at Appalachian State University in the fall, where he is studying Business Management and a minor in SCM. At Appalachian State, he was involved in Beta Gamma Sigma and Tau Sigma. He ultimately wants to earn his Masters of Business Administration.