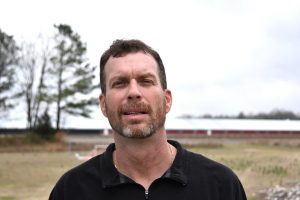 We are pleased to announce one of our grower’s, Jim Marvel, was honored as one of 10 2020 Outstanding Growers by Delmarva Chicken Association. Below is Jim’s story:

A longtime employee of Seaford’s former DuPont plant, Jim Marvel had always wanted to grow chickens, but it wasn’t until he and his wife bought the Ellendale-area farm property that the dream could become reality.

With his first flock raised in 2018, Marvel is a fairly new grower, but as an Outstanding Grower this year he’s clearly warmed to the job quickly. “I was so nervous. Really, really nervous,” he said, recalling his first flock of chicks arriving from the Allen Harim hatchery. “I had a good service tech who worked with me and made me more comfortable.”

Marvel’s eight-year-old daughter helps him set up for new flocks, and he appreciates – as he knew he would – the time this work lets him spend with his family. He inspects the chicken houses three to five times a day, making the first walk across the back yard to the birds by 6:30 a.m. and a final check around 9:30 at night. “There’s more to it than I think people realize. More work and more thought,” Marvel said. “I take a bucket and sit there and just watch them and listen to them. It tells you a lot. And even when you’re not in the houses, you’re thinking about them.”